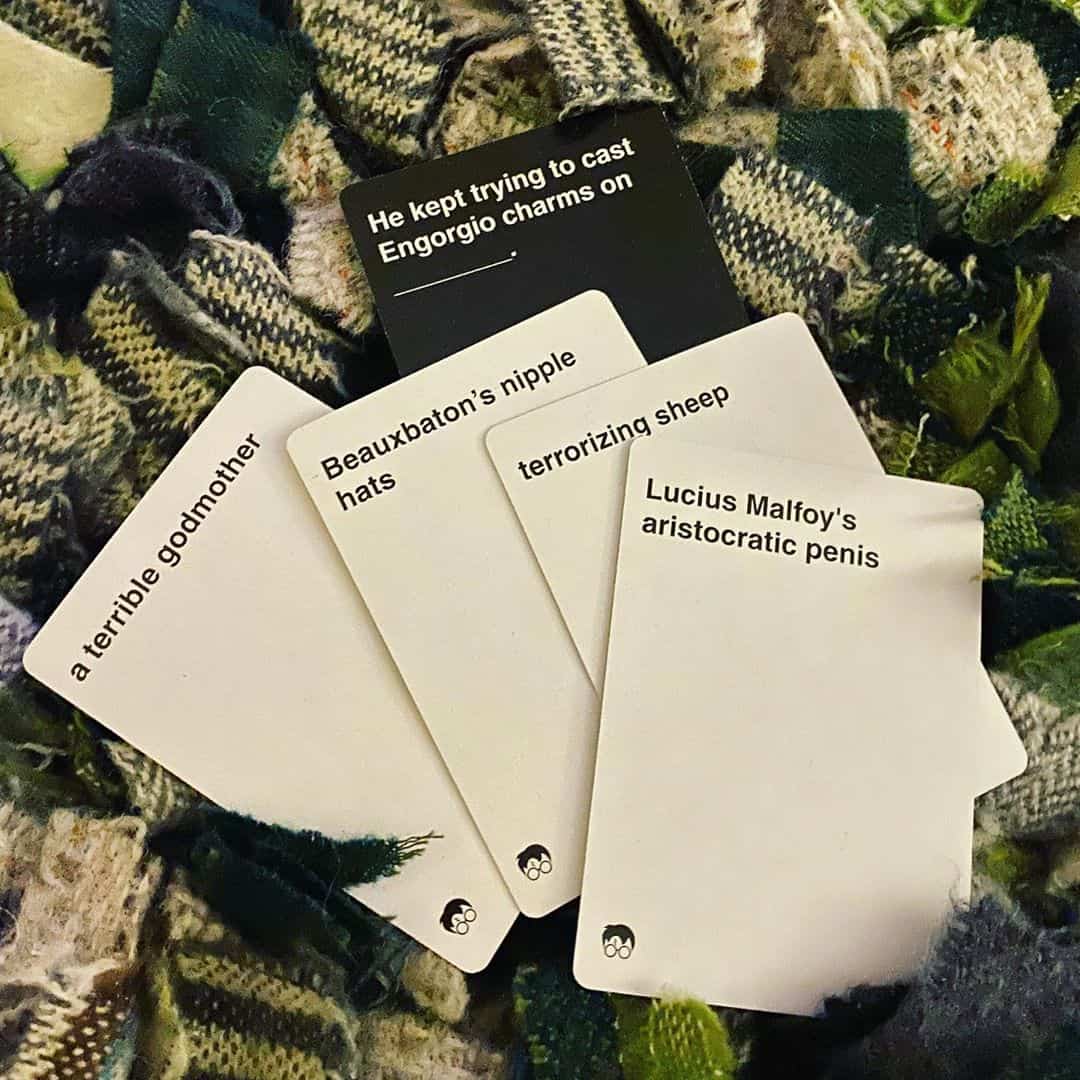 Are you a horrible person who fancies the Harry Potter book series, or maybe a plastic fan that loves the movies? Do you have the evilness required to become part of the Death Eaters’ squad? Or maybe Voldemort himself?

If the answer is yes to at least one of these questions, then you have what it requires to enjoy the Cards Against Muggles game – a dirty, horrible card game for people who enjoy +18 and dark humor and love the magical world of Harry Potter, with everything in it, except for muggles.

Cards Against Muggles is mirrored on the infamous group game of Cards Against Humanity. The game contains tons of references from the Harry Potter books and movies, as well as from A Very Potter Musical, making each fan giggle and cringe throughout the playing.

The game is quite dirty as it tackles a lot of NSFW topics, though it is a bit less offensive than the original Cards Against Humanity Game. Yet, Potterheads will enjoy it wat more than the regular game, just as casual fans (the entry to this article was just a bit of a joke, of course).

It uses its fictional world to its advantage, making jokes at the expense of pure-bloods, muggle-borns, squibs, goblins, house elves, etc., making the fame quite riddikulus.

It is important to keep in mind that in order for players to enjoy this game, they must be familiar with the Harry Potter world, or else they will fail to understand the references in the game, and thus, they will not enjoy it.

Who Created the Game Cards Against Muggles?

The game has been created by a group of hardcore Harry Potter fans, who were obviously, also fans of the Cards Against Humanity.

A group of Potterheads created the game by perfectly fitting in-jokes related to the wizarding world of our favorite witches and wizards.

How Is the Game Played?

Only adults should play the Cards Against Muggles game, we reiterate, as we do not want some young Harry Potter fans to get traumatizing thoughts on their childhood hero.

It is not suggested to take it out in family gatherings, except in case your family members are some dirty wizards, that know how to enjoy a good game, even if it’s full of dirty jokes and dark humor.

The full pack contains about 1440 cards, 990 of which white cards and the rest black cards. It is played the same way as the Cards Against Humanity, which means from four to over 20 people can play it together, within a period of 30 minutes to an hour and a half.

One person becomes the one who distributes the cards and gives 10 white cards to each person at the beginning. The white cards can contain anything from a name to a short statement, to a random list of things, to a single word, whereas the black ones contain a question or a fill-in-the-blank type statement.

The first player draws a black card that is placed in a pile. The player reads it aloud, and then each player chooses one of their white cards to read with the black card, aside from the person who red the black card.

Every player votes the favorite combination and the winner gets to keep the black card. The game is over when all the black cards are over.

It would be very thoughtful at the beginning of the game to ask all those present whether they mind dirty jokes and dark evil humor as if not, it is better not to include those people in the game. It will be more fun this way.

Where Can I Find/Buy the Game?

The Cards Against Muggles can be found at our store and bought online as a download PDF copy only. Those who want to get this game, should buy it online and then print it at a printing company.

Those printing this game are advised to do so in thicker paper, so it is not immediately ruined after one game. You can also get the special plastic-like paper to print the game on, so it is more durable.

The good thing about getting the game this way is that you do not have to wait for the shipping.

What Do Potterheads Think of the Game?

Harry Potter Fans, whether they have only watched the movie, or read all the books (more than once), in particular those that have also seen A Very Potter Musical, Harry Potter Puppet Pals, the Cursed Child, Fantastic beasts and more, absolutely adore the game.

All fans have a different sense of humor, but definitely, most of them have found the game to be hilarious.