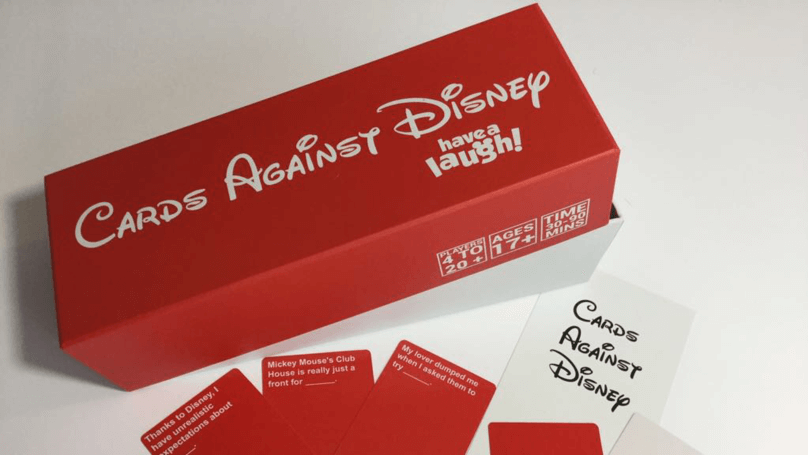 What are Cards Against Disney?

Oh, so you’ve found out about Cards Against Disney too!

Since you’re here chances are you’re a big Disney fan but  it looks like you’re not quite sure what’s all this noise about.

We all have heard about Disney movies, but what’s this card game now?

Read below and find out!

ards Against Disney is the unofficial Disney version of the Cards Against Humanity card game. The game consists of an unofficial parody version of Disney combined with inappropriate adult humor and can be played by 18+ players only.

The Cards Against Disney game box comes with 828 cards within, 260 wed cards and 568 white cards.

With a total of 828 cards the game creates the funniest atmosphere you ever had and allows you to make different card combinations which would lead to plenty of hours of fun and good laughs.

Is Cards Against Disney rude?

Now we’re at the magical moment — the card content of the Cards Against Disney game.

What does that mean?

We all agree Disney movies brought wonder and childhood joy in our lives.

But if you’ve decided to play the Cards Against Disney game, it’s time to say goodbye to your childhood innocence.

The game can be played by 18+ players only. Having that in mind, in one form or another we should assume that Disney characters have grown up within us as well. This is the only way we can have fun with the adult humor and inappropriate jokes that you will be faced with during the game.

That being said, you should choose your friends wisely in order to avoid any awkward situation during the game.

Who makes Cards Against Disney?

The Card Against Disney follows the same game rules and equipment as Cards Against Humanity except the content which in this case consist of Disney themes including songs and characters and movies.

Cards Against Disney Red vs Black

Have you asked yourself which one should I choose? We bet you did!

We are more than pleased to vanish this dilema from your head.

Cards Against Disney game comes with both red and black game boxes.

Just because the boxes are made of different colors this doesn’t mean the content wouldn’t be the same.

The content of both Red and Black boxes is the same. So, the color is the only differentiation that these two boxes have in between.

Feel free to choose the box with the color you like the most.

Whether you choose Red or Black, the cards and the laughs this game guarantees will remain the same!