View cart “Cards Against Office – Buy Box with 180 Cards Inside” has been added to your cart.

Cards Against Office – Buy Box with 180 Cards Inside

Get back to the Office series with the Cards Against Office. Experience the hilarious quotes, lines and characters of your favorite TV Show while playing the game!

Attention! Yes, we’re talking to all “The Office” fans out there.

A new unofficial version of ‘Cards Against the Office” has been released and we are all loving it!

The Office version of “Cards Against Humanity” is based on the most famous and loved TV series of all time, the Office.

The game will bring out the memories and will make you relive the joyful moments that the TV show has brought you combined with the favorite lines from the series.

Cards Against the Office is the perfect card game that needs to take place in your office or at your friend’s party.

The hilarious lines that the game brings will lighten your and all of your colleague’s mood.

Cards Against the Office Etsy

Mufflin made a hilarious combination of black and white cards which bring hours of fun and laughs at the table.

The Cards Against Office set includes 180 playing cards. 36 black cards and 144 white cards that can be utilized during the game.

Cards Against the Office examples

Cards Against Office card game is based on the theme of the TV Show the Office series.

The content of the cards includes sentences and sayings of your favorite moments of the TV show.

Along with the quotes from the most hilarious characters of the TV show, the cards also include images of the main characters which will make you fill the gap you had when the TV show ended.

Let’s see some of the most awkward and hilarious lines from black and white cards of Cards Against the Office.

Are you ready to laugh your head off? Because hell yes, we are!!

Before moving to separate examples of the Cards Against Office card’s content, take a look at these hilarious combinations from your fellow players!

Do you believe that the combination “And the Academy Award for pretending to care goes to God” wouldn’t bring you a bundle of laughs?

Wait until you see more card examples though!

The great combination possibilities that these letters offer will make you experience the obstacles and funny moments that everyday life offers us.

As in the case in one of our favorite lines from the Office TV Show series when Dwight assumed the situation in which the world is now.

In one of the episodes of the Office, Dwight said “There’s too many people on this earth. We need a new plague” and today we all are shocked and amazed how perfect this line is adapting the lock down the world is experiencing these days.

Where can I buy Cards Against Office

You can buy the Cards Against Office box in our online store for $40.

The game box includes a total of 180 white and black cards which you can use during the game.

Cards are used by the color. There are 144 white answer cards and 36 black question cards.

You can do various card combinations and enjoy the perfect time of choosing the best answer card of the game.

Buy Cards Against Office now and enjoy this wonderful throw back in time that these cards bring with your family and friends!

There are no reviews yet. 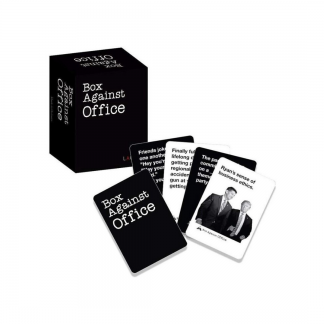